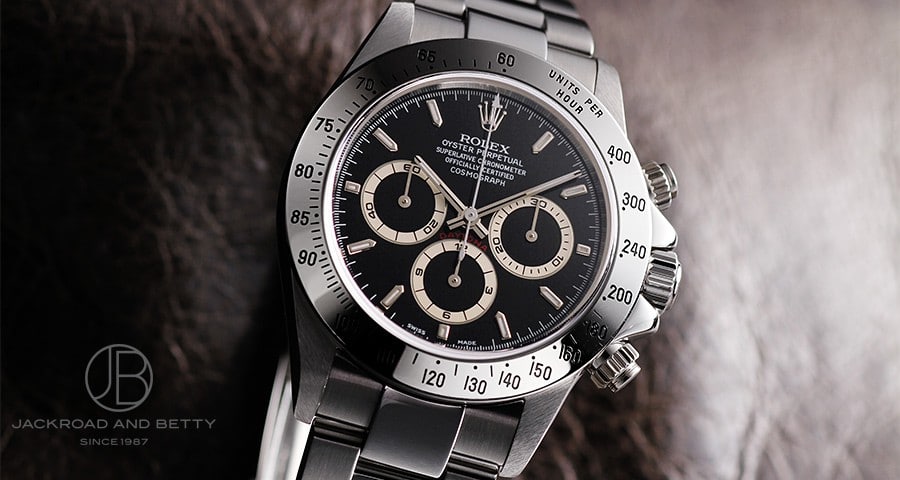 What is Rolex Cosmograph Daytona Ref.16520?

The first covered stadium in Japan, Tokyo Dome opened in 1988.
In the same year, the 4th generation Rolex Cosmograph Daytona Ref.16520 (stainless-steel model), which is a model equipped with an automatic movement, appeared.
Rolex is dedicated to self-winding watches and pioneered the use of a perpetual mechanism (automatic winding mechanism) before other companies, but since the chronograph model before the Daytona appeared around the 1930s, it was a half to the automatic winding of the chronograph model. It has been a century.
Striving to pursue perfection, Rolex has taken much care to every product. 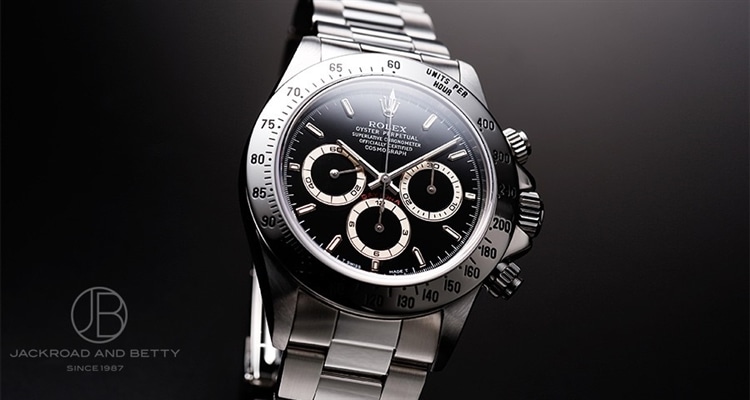 Rolex Cosmograph Daytona Ref.16520. The top of the Rolex Sports model for 12 years.

The mounted movement based on the Cal.4030, was later commonly called the "El Primero".
Rolex, as a manufacturer that emphasizes practicality and durability, surprisingly never used the "El Primero" even though it had a high beat rate of 36,000 vibrations per hour, instead opting to use it’s own original tuning has, such as adding a micro-stellar nut developed by Rolex to keep it at 28,800 vibrations per hour.
The chronometer standard Cal.4030 will reign as flagship model of Rolex Sports model for about 12 years. 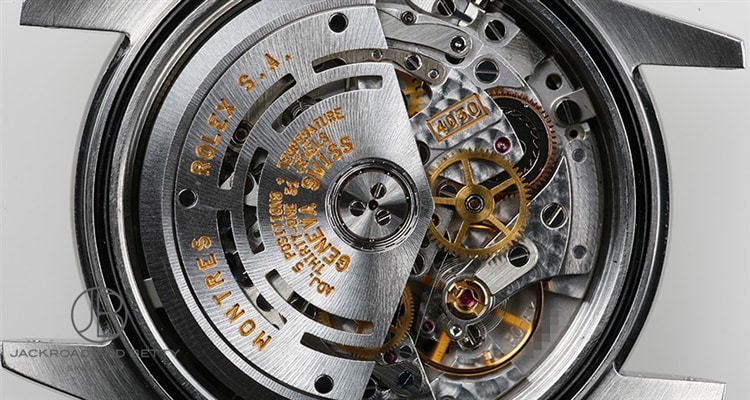 Daytona's first self-winding movement, Cal.4030, is usually hidden behind the case back, but its beauty is highlighted by its perlage finish on the main plate and various chamfered parts.

The case size has become larger since it incorporated a self-winding rotor, a common trend during that era.
The case width has increased from 37 mm to 40 mm, along with an increase in its thickness.
Due to the side hole connecting the case and the bracelet being closed, an increased sense of luxury could also be felt.
The tachymeter is located on the bezel as in the previous model but has been integrated into the stainless-steel (the third generation had two types, one plastic and one stainless-steel) for durability. 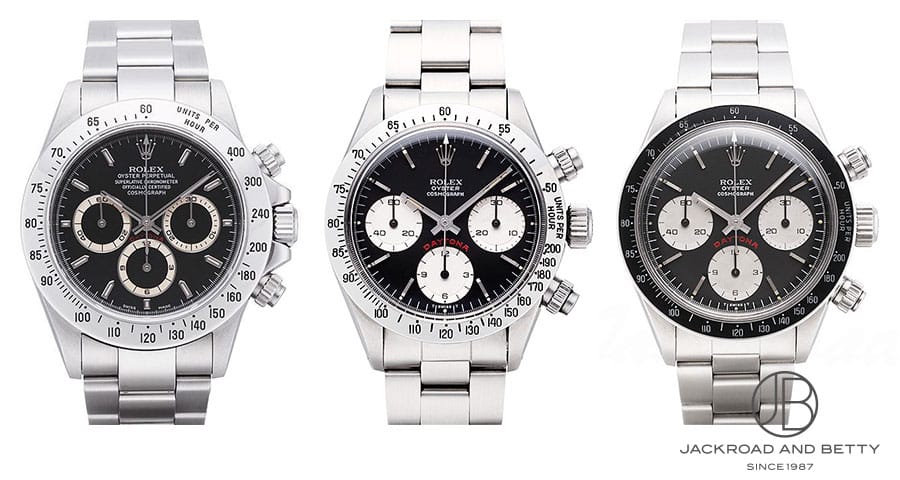 The display of the tachymeter was up to 200 in the initial model but was changed to 400 later.
There are also notations of 225 in some models. The material of the windshield was eventually changed to sapphire crystal.
The waterproof performance has been improved by 50 meters as well as the durability and practicality, which in turn went up to 100 meters waterproof specifications.
Given that the second generation was waterproof up to 30-meter, 100-meter waterproofing was indeed a great leap. 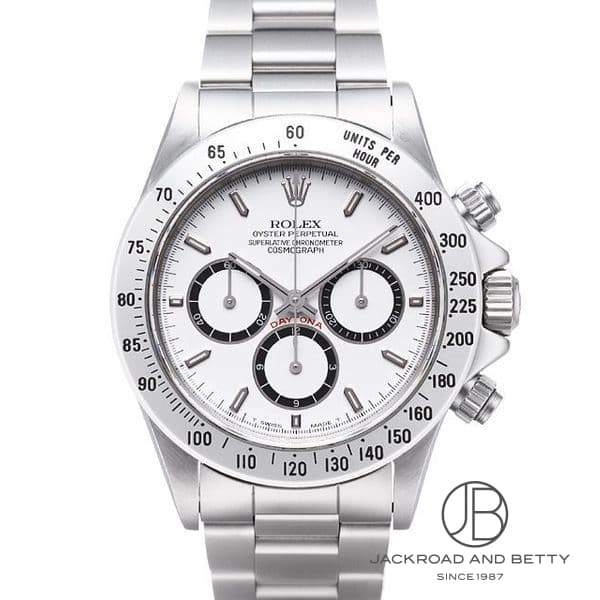 Ref.16520 of S serial. A rare model in which the border of the in-dial has turned brown and was often called "Brown Eye" or "Patrizzi Dial".

From around 1995, the bracelet was changed from triple Oyster single lock bracelet to W lock bracelet with a flip lock mechanism on the clasp.
Although it had been in production for 12 years, various trial and error from Rolex’s manufacturing since its initial model, resulted in several changes in the model itself.
As a result, it is also characterized by the premiumization on some models. 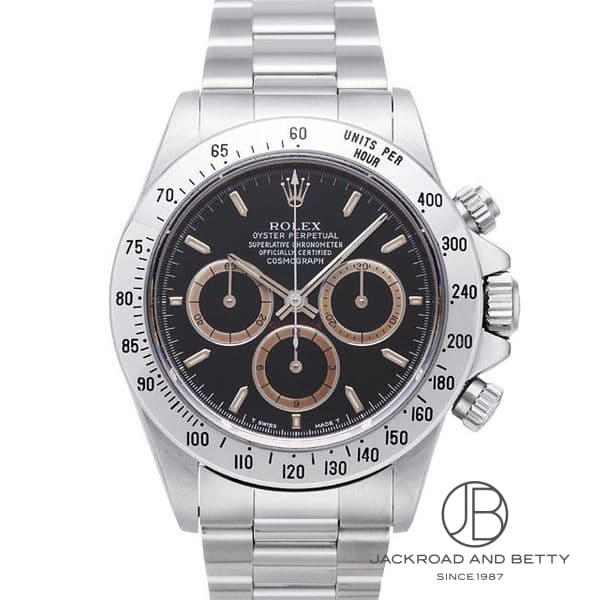 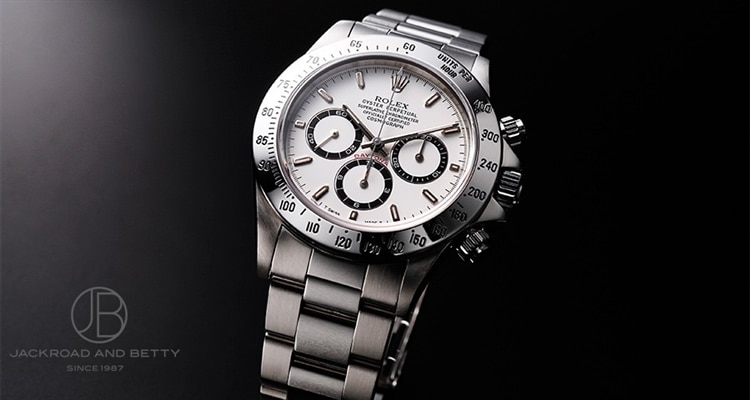 The first combination model of the 4th generation of Daytona.
The combination of stainless-steel and 18K yellow gold is the "Yellow Rolesor" coined by Rolex.

As mentioned above, a white dial, a champagne dial, and a shell dial were available in addition to the black dial.
The specifications are the same as the stainless-steel model. 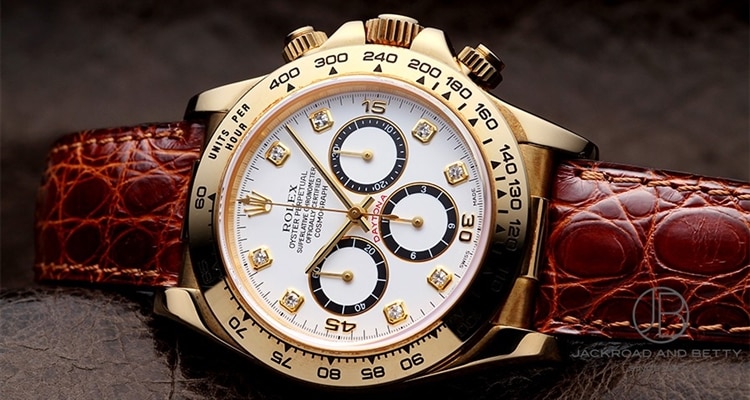 The first leather strap specification in Daytona history that appeared in 1991 was the Ref.16518.
The joint between the case and the leather strap was specially designed, thus it cannot be modified or replaced with a metal bracelet.
This specifications of this model has 8P diamond indices which makes it all more luxurious 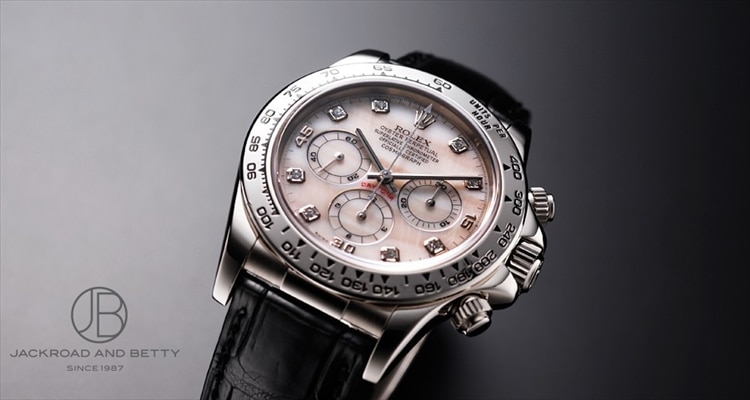 For luxury-minded users, the white gold case model, which appeared in 1996, the first ever Daytona combination with a leather strap will be a perfect fit for you.
The flash fit, which joins the case to the leather strap, was integrated to the case lug, making it impossible to attach a leather strap to a stainless-steel model (or vice versa).
In addition, it also has an exclusive tachymeter bezel design.
Dials not available with Arabic indices, Roman indices, shell and stainless-steel models were also available exclusively in white gold. 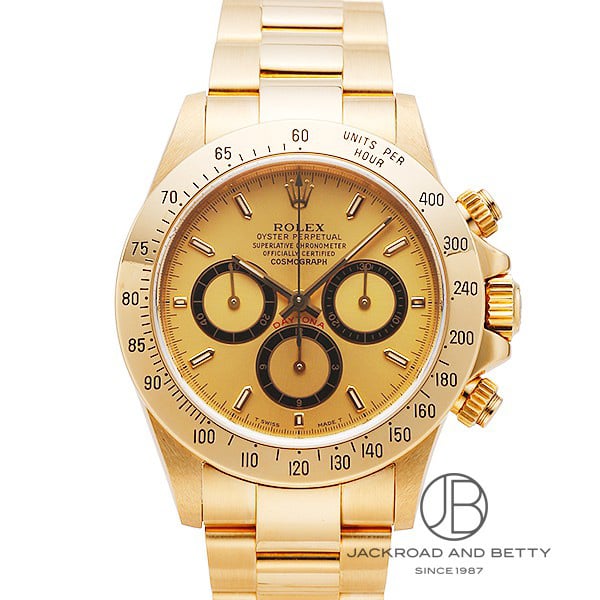 What is the purchase price of Rolex Cosmograph Daytona Ref.16520?

Twenty years have passed since the end of its production, so watches in that line with excellent condition have become increasingly rare in the market circulation year by year.
The early and late serial numbers of Ref.16520 are especially highly valued and are being distributed at premium prices.
Therefore, the purchase price is also very high.
To those looking to sell their Ref.16520, it is recommended to sell them to a specialty shop with staff equipped with the proper information.
At JackRoad we are proud to call ourselves a watch specialty store with over 30 years of experience!
An appraisal request can be easily made in 3 steps with fast results.

So what did you think about the 4th generation of Daytona Ref.16520, equipped with a self-winding movement, the first in Rolex Cosmograph Daytona history.
Post Vintage Rolexes are becoming rarer and rarer year by year.
Thus we are committed to purchasing Rolex watches!!
Hopefully in the near future, there’s a chance for the long-awaited Ref.16520 could possibly grace our stores?!
Lastly, don’t forget to check out our online store.

> > Rolex Cosmograph Daytona
Thank you for supporting us!
Everyone is having an anxious and painful day under the influence of covid19. We will keep updating our fascinating watches, bags, jewelry and more to keep you bored!